I used to love rides like this, and assume I still would. I guess I'll find out eventually.
Posted by Dad Solo at 4:14 PM No comments:

NJ had a nice little moment of bravery the other day. The notorious slide fanatic attempted her biggest solo slide EVER at the Golden Gardens playground.

Some things scare NJ -- as they do all kids her age -- and one of them was the drop she saw when she finally got to the top of the apparatus and sat down: 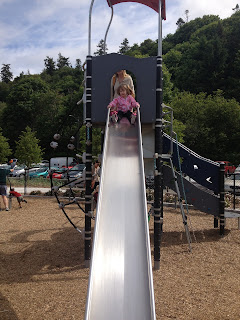 It's a long way to the top if you wanna rock and roll ...


I could see the concern in NJ's eyes from the bottom of the slide, and after a few moments she hesitantly stood up and walked away. The Wife (pictured behind NJ) said something like "OK, let's see what else there is to do" and prepared to climb down. Another kid was on the way up, though -- NJ saw her and reevaluated her position. She came back to the top of the slide, sat down, and firmly grasped the side railings (above). Her eyes looked the same, but I swear I saw them slide from concern to resolve a second before she pulled herself forward, then pushed down and slid to the bottom. It was the fastest she's ever slid, and she loved it. She performed the stunt several more times, consecutively.

(Later on she let go while swinging in the Big Girl Swing, i.e. the built-in seat, and it did not end well. But that's another, even less-interesting story.)
Posted by Dad Solo at 6:24 PM No comments:

They felt I really went overboard voicing my opposition to the Wiggles and cut that part down in this piece.
Posted by Dad Solo at 10:17 AM No comments: