Had Me A Swingin' Time

Dad Solo returned home last evening from a trip with his oldest close personal friend. We met up in a city we picked at random between Seattle and Houston so we could both travel there easily. It was fun, and I needed a little R&R after being on Parent Duty nonstop for months and months. Canyons were explored, wild donkeys were viewed, delicious meals were eaten, dice were thrown and elevens were doubled-down upon. Also, this was going on at our hotel, but we didn't buy a sequined glove or a pair of concert-worn socks. (I walked by once and overheard a woman holding a sheet of paper with a number on it telling a camera crew that it was "the happiest day of her life." Don't know what she bought, the poor thing.)

And, of course, a baby was missed. NJ is napping right now with the latest member of her stuffed animal collection, a donkey from the canyon. It might be time to look at other returning-home gift options, as her crib is filling up with stuffed animals. It's a tough call, though, because after months of indifference, she's completely into them now.

NJ had a big weekend while I was away. She sprouted Tooth No. 2, right beside Tooth No. 1, and got a new dress for a wedding we're attending in a couple of weeks. Sunday, she and The Wife teamed up with some friends for a zoo trip; NJ apparently was a big hit at the petting zoo, blowing into the place like Sinatra swaggering into the Sands.

And while I had an awesome time away, it was great to watch NJ smile, laugh and clap as I slid into the back seat yesterday upon my triumphant return to Seattle. She flirted with me all the way home, just the tonic for the weary traveler.
Posted by Dad Solo at 9:47 AM No comments:

NJ's grandparents returned to Texas yesterday after a six-day love-in. NJ has been a little cranky lately -- and with a new tooth and a touch of diaper rash, who can blame her? -- but she still managed to turn on the charm and keep it flowing. (Of course, the Texas grandparents are a pretty rapt audience, and already in the tank for her. But nonetheless, she killed.)

The grandparents are so crazy about her that Gram didn't even complain when I put NJ's Willie Nelson onesie on her. That's true love. 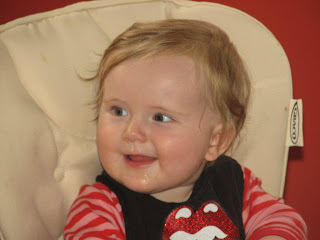 And Then There Was One 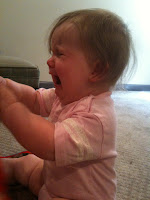 Wednesday: Inexplicably fussy baby takes a day off the fussy

Thursday: Inexplicably fussy baby cries with Granddad on the sofa

Friday: Inexplicably fussy baby cries again on the sofa, hurting Granddad's feelings (although he wouldn't admit it); Dad Solo peers into fussy baby's gaping maw and discovers that yes, she will indeed sprout teeth after all

Saturday: Who knows? (UPDATE: Now we know -- a thirty-minute crying jag before afternoon nap. Hooray for teeth!)
Posted by Dad Solo at 11:02 AM No comments:

My Daughter Is A Keyboardist For Spinal Tap

NJ has two things in common with Viv Savage, the keyboard player for Spinal Tap:

1. Viv's philosophy was "Have a good time, all the time." NJ hoists her sippy cup in hearty agreement.

2. Like Viv, she's mastered playing two keyboards at once. 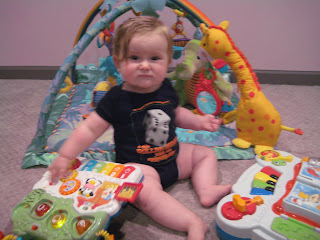 "Quite exciting, this computer magic!"

NJ has developed a deep, irrational fear of this rubber ball.

Last week we played and played with it. I'd roll it to her, she'd reach out and corral it and bring it in and then beat on it like a drum to celebrate the successful transaction. 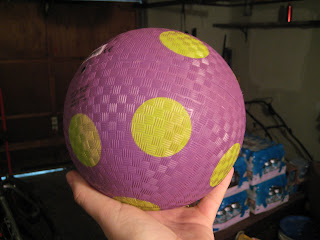 Photograph taken at undisclosed location (the garage) so's to not upset the child.

Last night, The Wife and I broke out the ball again, and the reaction was much different -- shrieking and crying. She acted like she was afraid of it. Same today -- I produced it and NJ immediately whined. When I rolled it to her, she leaned over and grabbed it, pulled it close and beat on it again. Crying the whole time. I rolled it one more time, and the crying intensified. She caught it, and when I went to retrieve it she was actually trembling. So: Ball play is over.
Posted by Dad Solo at 11:27 AM 1 comment:

Caught You Smiling At Me

Occasionally NJ and I sit here in front of the computer and shoot a video for The Wife's enjoyment. Her company's network doesn't permit large e-mail attachments, so the clips are usually in the two- to three-second range, just a dash of cute. Yesterday's theme was Led Zeppelin:

For this particular shoot, all it took to get NJ rocking (in her new Zep shirt, which The Wife hates) was to TURN THE MUSIC UP. The party lasted longer than this clip, trust me.

I hope this is the last time my daughter ever rocks out with some obnoxious jackass shouting her ear. What are the odds on that? Oh, wait, never mind. I don't want to know.
Posted by Dad Solo at 9:39 AM 1 comment:

This morning, as NJ was playing and I was guzzling coffee here at the desk, she looked up from her pile of toys and gave me a half cry. I started talking to her and she did it again, a little louder and a little whinier. Then she raised her arms. I picked her up and she let loose a yawn that lasted about twenty minutes. I took her upstairs and she was asleep in her crib before I could get out of the room.

It beats the last time she outwardly indicated she was ready for her nap, when she just fell over asleep.
Posted by Dad Solo at 9:52 AM No comments:

This Place Is A Zoo!

That's what I said after weaving my way through the crowds after getting our lunch at a stand at the Woodland Park Zoo. The Wife didn't appreciate the humor as much as she should have. Because that is very, very funny, and my timing was impeccable.

We walked the twenty or so blocks south to the zoo today, after seeing how surprisingly nice the weather was going to be. NJ enjoyed the stroller ride over, but really got excited when we stopped at the park before going in and put in some swing time:


Note the leaned-back posture NJ assumes in the swing. The boy next to her, who was the same age, used the opposite strategy, leaning all the way forward. Hard to tell which is more effective. Not that it matters, really, because after all we're only talking about toddlers in swings.

At the zoo, which we joined last week, we saw a couple penguins, a couple of species of bears, tigers and meerkats. I say "we" saw them because The Wife and I did; we're not sure NJ caught any of it. She was enjoying being out in the sunshine with lots to see, though, even if she couldn't 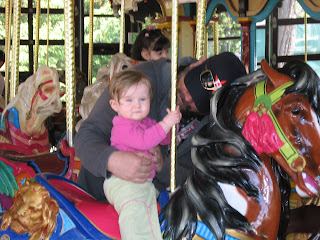 pick out the sloth bear* in the tree. After lunch, where NJ ate a significant portion of The Wife's salmon fillet, we hit the carousel before leaving. This NJ LOVED. She loved sitting on the wooden horse and holding the pole, and once we started she spent most of the first round waving. One section of the go-round went by mirrors that were placed in angles that made it look like you had already passed yourself up -- this tripped her out the first time she saw it, but after that it was old hat. As the final trip around started, NJ leaned her head back and looked up at me with a nice little smile that probably meant "Thanks!" or something like that. Then we tucked her newest stuffed animal (Meerkat Mike) into the stroller with her and left. By the time we got home she was asleep in her stroller. Once inside, though, she was all smiles again. We'll definitely be going back. (We have to, because we bought a membership and it takes three trips to make it worth the money. But still.)

*UPDATE: I am reliably informed that it was a sun bear, not a sloth bear, that was up a tree.
Posted by Dad Solo at 2:19 PM No comments:

The Wife warned me about it this morning, and it happened to me at lunch. Today was my first experience with The Spitter.

Yes, NJ has added another arrow to her quiver, alongside the adorable waving and clapping and tongue clicking and dog-adoring and learning to crawl and other current, cute-as-all-get-out interests. Today she spat out about half of her lunch. On the high chair tray, and on Dad Solo. On 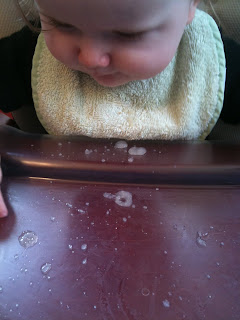 my glasses, face, beard, shirt, lunch, and even my iPhone, which was a good 18 inches away from her. Every third spoonful of pureed pears spewed back out, as regular as Old Faithful. To the right you'll see one of the tamer eruptions; that circle in the middle of the biggest pear blob? A fingerprint! Because of course you have play with it once you've spat it out.

After six or seven eruptions I pulled the pears away and gave her a cracker -- good luck making a spittable mess with that, NJ! (I shouldn't taunt her like that. She will do it.) After finishing that we went back to pears and her spitting zeal had subsided somewhat. And when it was all done, I had a quick word with her about why it was a bad idea, that she should eat that food instead of making a mess with it that Dad Solo has to clean up. I noticed her face was getting red, and then she started grunting. So I ended up cleaning another mess up, too.
Posted by Dad Solo at 12:50 PM 1 comment:

A package of baby-proofing gear -- cabinet locks, a stairway gate, soft corner protectors and shade cord wind-ups -- is due to arrive today from our favorite online purveyor of baby goods and sundries. And just in time, too: Yesterday marked NJ's first serious foray into the world of movement.

I put her down on her tummy at her toy corner here in the office, turned to read a couple of e-mails, then turned back to see her far away from where I'd left her. Then Willie the Lab joined us and NJ backward-crawled over to see him. She kept at it, making something of a Figure Four on the carpet until her feet were pressed up against a toy keyboard, which was pressed against the wall, which meant the end of backward crawling. When The Wife got home later on, NJ was in no mood to replicate her feat, but she obliged for her mother this morning. Again, getting to Willie the Lab was a key motivator.

Separately, yesterday also marked the first time NJ pulled herself up onto her knees during tummy time. Once she puts the knee thing together with the desire to get to the dog, all bets are off.

Today it's been more of the same, with some holding-the-edge-of-the-couch standing for good measure.
Posted by Dad Solo at 9:34 AM No comments: