Overheard At The Dinner Table 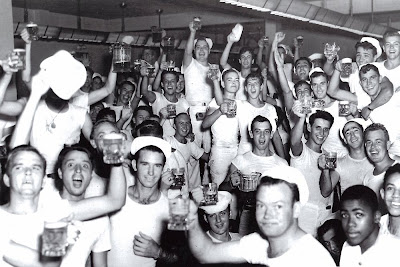 Labels: dad is a doofus, dad's state of mind, nj, the funny

I'd been looking forward to Father's Day a little more than I thought I would after becoming a self-declared expert on fatherhood, and this morning didn't disappoint. I woke to the sound of NJ and The Wife coming up the stairs, and opened my eyes to the sight of the kid's beaming face next to mine on the bed. Blueberry pancakes, a nice bottle of wine to enjoy in a decade or so, and this hand-crafted, one-of-a-kind, artisan place mat: 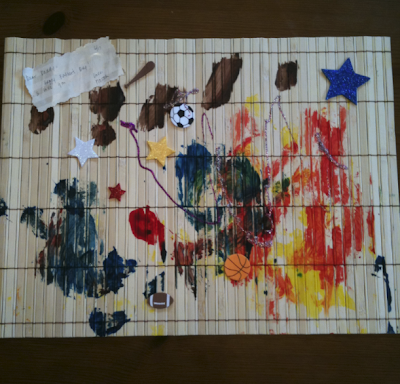 I also received a Father's Day card, but NJ confiscated it because of the cute puppy on the front.

NJ loved her pancakes, too, particularly once she realized how fun (read: messy) they'd be to eat. 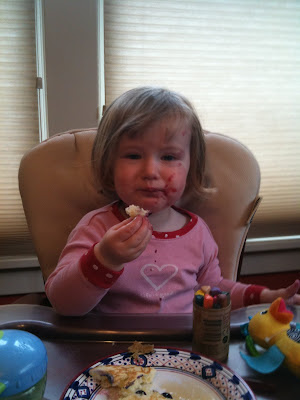 I'd been a little blue around here the past few days because NJ has been on a cling-to-mommy jag that'd left me feeling a little out in the cold. (Turns out a dopey middle-aged man has relatively little control over the many quick-firing moods of a 22-month-old -- who knew? What's that you say: Everyone knows this? Ah. OK.) Perhaps NJ already gets the meaning of Father's Day, because it's been all hugs and smiles and delightful jibber-jabber this morning. In a few we're headed to Golden Gardens beach, where we'll brave the 55-degree June weather to build a few sand castles. I hope all fathers are feeling as happy and blessed as I am today.
Posted by Dad Solo at 10:43 AM No comments: 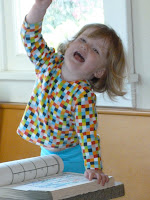 NJ's grandparents' visit was a success, by most standards. Much like her trip to Texas, she started off all bashful and shy with my folks, but being on her home turf apparently made a big difference, because she warmed to them quickly (if not totally).

My mother got a lot of attention -- particularly when she broke out the cookie dough for a baking session after we told her NJ often holds the TV remote to her ear like it's a phone and says "Grandma? Cookie?" She was more coy with my dad, but thankfully stopped calling him "Grandma" in favor of "Dad-dad," his now-official grandparenting moniker. She was still extremely shy with him, but she always made darn sure he was paying attention to her, no matter whether she was in her crib or high chair or on the sofa or running around the living room. He got lots of smiles and giggles, and when he carried her to the table for dinner their last night here, it looked like they were BFFs. 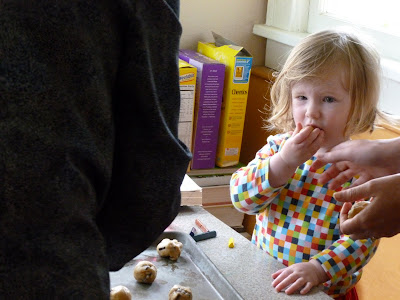 Daddy told me the raw cookie dough is better than the finished product. And, sorry ladies, but he's right!

We (and by "we," I mean "The Wife") were worried that NJ wouldn't play nice with her grandparents when her parents went off to enjoy the song stylings of a little musical combo from Ireland. We got her up unusually early that morning, cut her nap short and took her to the zoo in the afternoon, hoping she'd be worn out by early evening and we could get her in bed early before heading off to the concert. It worked, at least as far as we know; my mom and dad insisted they didn't have to check on her once all night. Flying two babysitters in from more than 2,000 miles away to see a show for which we held tickets for as long as we've had the kid -- it all worked out in the end. 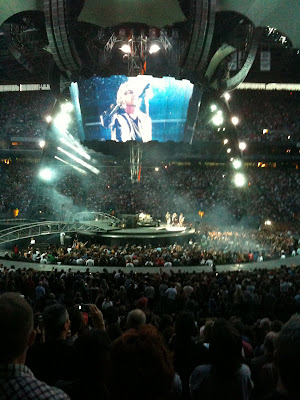 Yesterday I took my parents to the airport VERY EARLY so they could fly back to Tejas. NJ asked about them when she woke up, later, and again both when The Wife picked her up from day care and when they arrived home in the evening. And they came up again this morning in our breakfast semi-conversation. She's got Grandma and Dad-dad on her mind, which is good. She's got great taste.
Posted by Dad Solo at 9:19 AM No comments:

Her garden-centric grandmother is coming to visit tomorrow, so NJ used the Memorial Day weekend to get some of her planting done.


That thumb she's always sucking turns out to be ... green.

She points to the window box and exclaims "My garden" whenever she sees it now. Next up, I plan to teach her to use the lawnmower.
Posted by Dad Solo at 11:17 AM No comments: