Freedom Has A Scent, Like The Top Of A Newborn Baby's Head

I was a little surprised a few weeks ago when The Wife declared she was going to recruit my parents to babysit NJ. We had plans to attend a rock and roll show next month, put on by a little 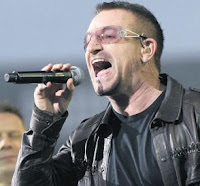 combo out of Ireland who call themselves U2. Not that the grandparents aren't willing to babysit, mind you, but they agreed to travel from Houston to Seattle to do it. So she called them, spoke on the phone for about 15 minutes in the kitchen, and came out declaring that they'd be here for a week. I thought it was a pretty spectacular feat at the time, but quickly realized that the folks will jump at any chance to see their granddaughter. They positively adore NJ and they haven't seen her since Christmas -- and, of course, she's a completely different person now.

Of course, U2 isn't coming since Bono had to have emergency back surgery. (You know you're getting old when a concert is postponed not because the star got busted for public intoxication or punching a cop, but because he threw out his back.) My parents are still coming, though, and that's great. My mother even offered to come back again whenever the show's rescheduled (that'll be in 2011, apparently). She laughed when I said that by then, NJ will be old enough to go with us -- after all, for months she fell asleep to the sweet lullaby sounds of the band -- but Mom sounded a little nervous so I assured her I was joking.

So: No U2, but babysitters. Of course, we can always pop a U2 DVD in the machine. I'm sure Mom and Dad will love that.
Posted by Dad Solo at 4:00 PM