We went to Texas last week to visit my parents, who were delighted to get the chance to spoil the little kid rotten. It was quite a time for NJ -- she was pretty discombobulated, but still managed to have some fun. The last time this set of grandparents saw her was way back in June, when our elaborate plot to have them babysit while The Wife and I got our Vertigo on fell through thanks to Bono's back woes. In the past 10 months, of course, NJ has blossomed into a completely different person. A person who didn't recognize Grandma and the man that, for the moment, we'll call "Grandpa."

First things first: On the flight down, NJ was a dream. We waited almost two hours on the plane while a repair crew fixed a dent in some part of a wing, and she was a trooper. Only once, after her lengthy nap, did she squawk, and it didn't last long. 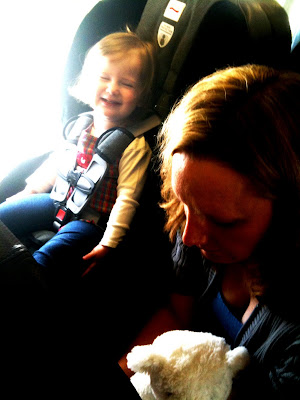 Oh, Daddy, this 'heat and humidity' you keep talking about sounds divine!

At some point not long after we arrived, NJ assumed the role of the Shy Showoff. There was lots of flirting with my parents, but she wouldn't actually, you know, go to them. My father, in particular, was the victim of a lot of teasing -- NJ would watch him intently, and when she caught his eye she'd smile bashfully, cock her head and giggle. If he reached toward her, though, she'd turn her head and pull away. (She eventually turned her back on me, too, and would only consort with her mommy. Me, the guy who attended to her every need for the first year of her life. Sheesh.) NJ remembered that my mom is Grandma, but apparently thought the name applied to both grandparents because that's what she called my gray-bearded, mucho macho father, too. All week.

One day we went across the street to a day care center -- were Dad Solo himself graduated from kindergarten some 358 years ago -- to participate in the annual ritual of picking colored plastic eggs up off the ground and placing them in a basket. NJ and her mom hung around with some kids her age -- kids who were dying for some attention, apparently, because The Wife was overrun with children as soon as she stepped in the room. They waved books until she cracked one open and started reading. I went in next, and likewise was swarmed. By two cute girls in particular, Rain and Kendall. After hanging around for a few minutes, it was time to head outside for Easter egg hunting. NJ ended up with four, I think. Then, it was off for some real fun -- at a Goode Company barbeque joint. 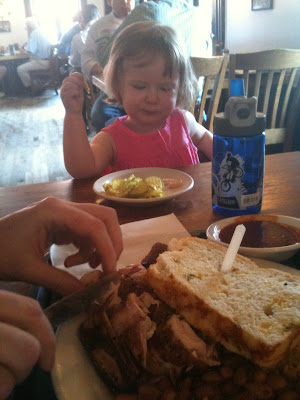 The next day we headed to Moody Gardens in Galveston, where NJ took yet another aquarium by storm, backing up and squealing when the giant seal swam right toward her in its glass-sided tank and watching intently as some sort of shark made the rounds in a different tank. She really started to show some travel fatigue here, though. The two-hour time difference, new surroundings, a new bed, a notable decrease in the number of available toys, problems sleeping, the climate -- these things all took their toll on the kid, and when we decided to wait another 15 minutes to see the penguins get fed, she tantrumed up right there on the floor. (There were lots of tantrums on this trip.) We hit a park that afternoon for some slide-and-swing action, one of two we visited that Dad Solo prowled as a youngster. NJ wasn't too impressed by that, though. 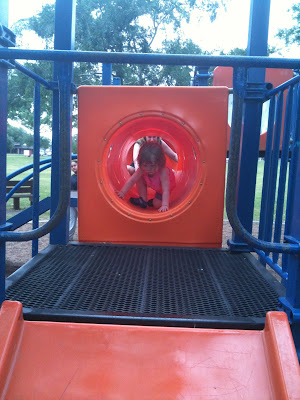 Daddy crawled through here decades ago? Who frickin' cares!

NJ had lots of fun on Saturday, when we journeyed an hour-plus to the other side of Houston to see Dad Solo's best-friend-since-first-grade and his family. Best friend's wife and two daughters went above and beyond playing with NJ, and they saved the hides of myself and The Wife by buying swim diapers so the kid could get in their pool. NJ loved it, even though she wouldn't leave her spot sitting on a step next to her mommy. 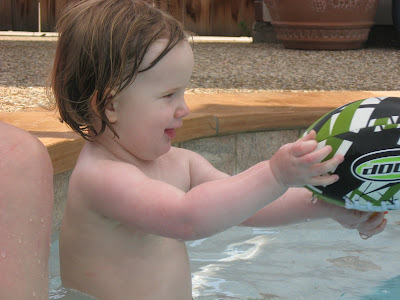 Go to the jacuzzi and cut sharp to the right, curl pattern in front of the inflatable turtle. On two!

That was her favorite part of the visit. Mine was when she picked up a male doll and said "Daddy," then a little girl doll she called "Baby," then a "Mommy" to round it out. She put Daddy on a dollhouse bed, then Mommy right next to him, then fussed around a bit before adding Baby right between them. Then she moved them all around and shook the bed and knocked all three dolls off of it. I marveled at her dramatic/artistic chops and keen insight into the familial condition.

When we got home we told my father that NJ had identified one of my friend's pieces of artwork as "Grandma." It was supposed to make him feel better (mind you, he took it all in good humor), but I don't think it did. 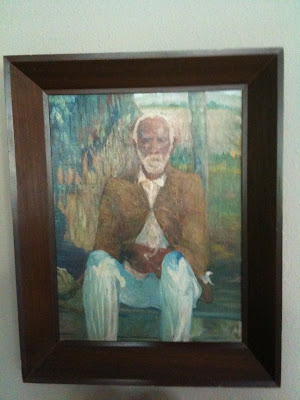 Sweetheart, that ain't no one's Grandma.

By the time we were ready to come home, NJ's sleeping patterns were completely whacked (the three of us slept in the same room, so I heard it all), and her pre-flight nap didn't do much good. At the airport, as we were saying our goodbyes, my father hugged me and reminded me that they're scheduled to visit us here in Seattle in June. "Every day between now and then," he said, "I want you to show her a picture of me and say 'Granddad' until she gets it." (So far, not so good -- although I think she may be working toward a "Dad-Dad." I hope that'll be OK with him.) Much like our first flying experience with her, one flight went really well and one flight went really not-so-well. And you've already read that the flight to Houston was a good one, so ... 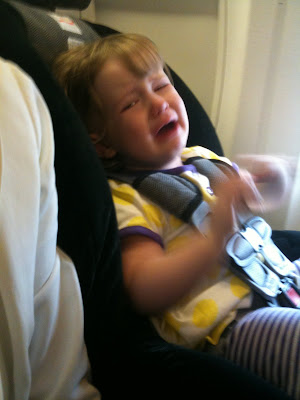 Heat and humidity,' huh? The heck with that! No way!

So bad that I turned my iPod up extra-loud. So bad that we registered our first blatant "shut that kid up" stare from a fellow passenger -- blatant enough that we actually saw it. (Not "we," I guess, just The Wife. I missed it. If I'd seen it, I'd have had a chance to hone my It's My Turn speech.) Halfway through the flight she finally crashed and slept the rest of the way while some other toddlers howled and wailed. (Take that, dirty look-giving woman!)

After a day home Monday, NJ went back to day care today and, now, seems to be her old self again. As I mentioned, my parents are coming up here in about five weeks. Also, there's another trip to Connecticut coming later this year, to see The Wife's folks. At least two more opportunities for NJ to bond with her four grandparents. And to get it straight on the whole Grandma/Grandma thing. I'm working on it, Dad.
Posted by Dad Solo at 8:29 PM