NJ's been pretty moody lately -- The Wife put a comment on Facebook the other day lamenting the Terrible Twos and got a whole bunch of sympathetic responses (and warnings that the Threes could likely be even more Terrible ... so there's that) -- so we're doing what we can to tamp that stuff down without going whole-hog on the spoiling and caving in to every demand and whim. Sometimes it works; she seems to (finally) get the idea behind "just one more," for example.

But now it's really hit home for me how my actions can influence the course of events.

A few days ago I bought NJ the awesomest long-sleeved t-shirt ever, thanks to a discount at one of my favorite haberdashers. What 23-month-old wouldn't want to give major props to the man who taught the world how to play guitar? Ladies and gentlemen, I give you NJ and Mr. Chuck Berry: 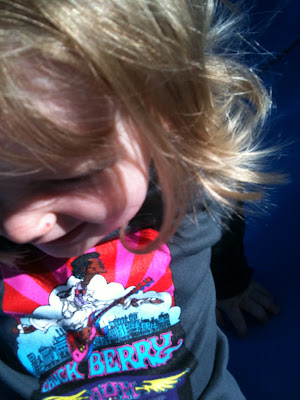 "Daddy, I'm not going onstage until I have every dollar of my money, in cash, in a briefcase or even a dang paper bag. Otherwise, you gotta go out there and tell those kids there ain't gonna be no show tonight."

And, since I was already on the website, I figured I'd get a nice little something for myself, too. I had a discount, after all, but more importantly: I deserved it. So I did.

A couple of days ago NJ was on a real tear -- happy one minute, ticked off the next, then wailing, then laughing and crying simultaneously, the whole bit. Finally it was bath time and as usual I scooped her up to get her undressed and ready for the March of the Towel-Carrying Naked Baby down the hall to the tub. She'd been clinging to Mommy a bit, and as I put her on the changing table her cries for The Wife got louder and more insistent. Then she ratcheted things up to desperate. I laid her down and noticed she was looking at my belly with a heady mixture of fear, uncertainty and dread. I tried to soothe her, but the stink-eye persisted. I know, NJ, I know -- I gotta drop a few pounds, I get it! I thought. Then, with a quiver in her voice, she spoke as she gestured at my stomach:

Bees are NJ's latest (and first, and only, as far as I know) scary fixation. The Wife started calling them "honeybees" in hopes of sweetening (ha!) bees' image with the kid. The PR effort has failed, at least up to now. Occasionally NJ will hesitate while playing outside because she saw a bee, or thought she saw a bee, or just associated flowers with bees and assumed bees were lurking.

But there were no bees in her room. What there was, though, was the new Wolfgang's Vault t-shirt I was wearing. It features this: 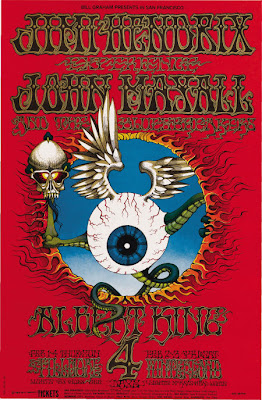 Yep, a tribute to the man who retaught the world how to play guitar (or tried to -- no one could keep up, really) frightened the dickens out of my kid. And it makes perfect sense that she'd associate this dodgy flying eyeball with another round, winged thing that can be scary.

Once I put two and two together -- and after I had a good chuckle while the kid lay uneasily on the changing table -- I pulled the shirt off, turned it inside-out and put it back on. And NJ's mood turned 180 degrees in a second: smiling, giggly, ready to continue our pre-bath rituals.

If it was me, I'd have been even more concerned that the flying eyeball was now inside my daddy's shirt, because just think of the chaos it could wreak there. But it wasn't me, it was her. And now I have to be sure to wear that shirt only when she's not around, or under a sweatshirt or something. Until she's old enough to appreciate Hendrix, of course. Perhaps her uncle will teach her to play "Purple Haze" one day and we can all head over to Capitol Hill, pay our respects and tell spooky stories about the Flying Honeybee Eyeball. 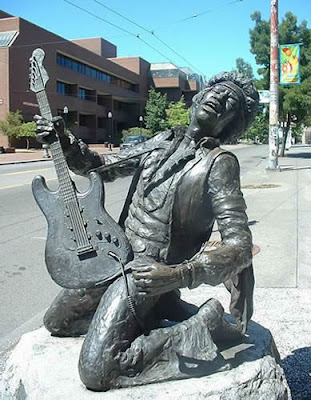 Maybe his eyes are closed because they flew away.

Now I'm looking over to the corner of my office, where a rolled-up poster is leaning against the printer table. Haven't gotten around to framing it or hanging up or anything, and now it's pretty clear that I won't be doing those things anytime soon. I guess it'll be safe to put it on the wall in, what -- fifteen years or so? 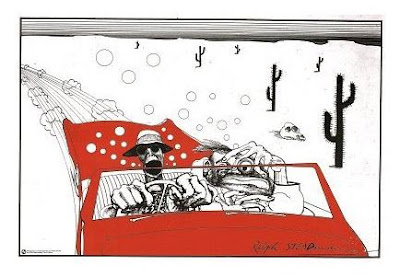 "It never got weird enough for me." -- Hunter S. Thompson