Ever since NJ and I opened the Curious Case of the Jimi Hendrix Flying Honeybee Eyeball, I've been careful to wear the offending t-shirt under other clothes so's not to alarm her. If you're too lazy or obstinate to click on that link -- the kid was afraid my t-shirt with this on it: 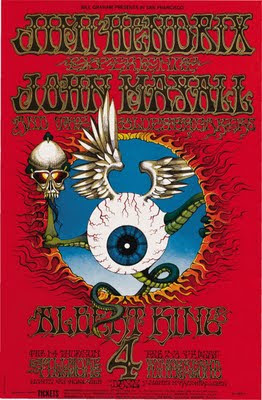 Yesterday I pulled off a sweater, forgetting that I was wearing the Hendrix eyeball T underneath. But instead of getting frightened, NJ looked at it curiously, with a hint of a grin, and said "What's that?" I explained it, she studied it a few moments longer, then went back to her Play-Do. It appears that, at long last, the house is once again safe for flying eyeballs.

Don't know if this exchange had anything to do with NJ saying later on that she wanted to eat her mommy's eyeballs.
Posted by Dad Solo at 11:28 AM