Change for a Fiver

NJ hit the five-month mark on Friday, and she and I hit our (approximate) one-month mark as a daughter-homedaddy duo. The biggest thing I've noticed in the past month is the incredible ramping up of her personality. She's all smiles lately, and is very interested in whatever's going on. Mostly, though, she's 'talking' all the time. Up until recently she would jabber randomly and occasionally. Now she's jibbering constantly, and at us. Directly at us. She has things to say, orders to give, pleas to make, points to emphasize. It's fun watching her figure out how to use her mouth and vocalize; the tongue makes regular appearances now, and The Wife was delighted when NJ blew her first true raspberry a couple of days ago. 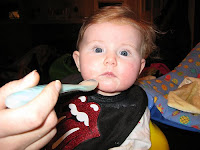 We're also getting solid food into the mix, and NJ is digging that, too. I was a little nervous about it because we had a tiny bit of trouble getting her to eat from a bottle. She loved her milk-and-rice-cereal concoction, though -- leaning forward toward the spoon, opening wide, and eating more of it than she didn't eat. And there was your standard-issue adorable baby-food-on-the-chin mess, of course. I was thrilled to be able to break out the ridiculously cool Rolling Stones bib, too. A friend commented that it's probably the same one Mick and Keith are using these days.

Tonight The Wife and I are going out to dinner. We've done it once before, when my parents were in town, when we sat down to eat at 5 (two margaritas each AND dessert!) and were home by 6:30. Tonight will be an early-bird special, too. We're dropping her off with a couple who has a son who's two weeks older than NJ, and will be returning the babysitting favor this coming weekend. The Wife has been nervous about leaving NJ with others, parents or friends or whoever, but our first outing went off without a hitch and that put her at ease, so hopefully there won't be any hiccups tonight.
Posted by Dad Solo at 2:09 PM