Willie, the leader of the beloved Two Idiots comedy duo (he's Oliver Hardy to Zeus's Stan Laurel), used to run this household. Now, though, he knows NJ takes precedence and he's supposed to be careful around her. He will very occasionally sneak up behind her and sniff her head when it's 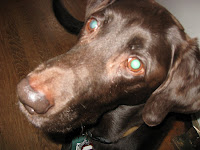 playtime on the floor, but otherwise he steers clear. Two factors there: 1) his earliest experiences with her, when she was tiny and cried long and loud, Willie would make a beeline for the absolute furthest corner of the house; and 2) every time he so much as ducks his head in her direction he hears an ominously stern "Willllll-iiiiiieeeeeeeeeee" warning from me or The Wife. Translation: "Tread very lightly, my friend, upon pain of a stinging swat on the ass and an uncomfortable delay in getting your dinner."

All in all, his interest in NJ has diminished since we brought her home in August. Lately, though, her interest in him has spiked. She's fascinated by his luxurious coat of Labrador fur. She doesn't pull his fur or squeeze his hide, just a flat hand on his back, maybe a flex of the fingers. Maybe it bothers the dog, although he's such a needy "pet me now" pup that I doubt it. Mostly he just knows that she's trouble, Mister, and he'd better make tracks. Which is good. Willie's a little dumb, but he's not stupid.

I'm stupid, though. I was playing with NJ this morning -- it was Space Commander time, and she was soaring a good foot and a half above me and the bed -- when I dipped her down to check on the Space Dog, who was laying warily next to me. NJ flattened her hand on his back, petted him a couple of times, and Willie tensed up but didn't move otherwise. Then, she came down for another touch, startling Willie. The dog jerked his head back and up -- he's got very good reflexes for a 12-year-old, cancer-ridden Lab -- and his snout smacked NJ right on the forehead. There was a little bit of crying, and for a few moments she sported a red spot, but it wasn't a hard hit and soon enough she'd forgotten about it. (Willie is probably still thinking about it -- he's made himself relatively scarce ever since. Even when NJ spit up on her play mat, something that he's usually very eager to help clean up.)

The incident was all Dad Solo's fault -- I flew her too close to the tense dog -- and he continues to inadvertently beat on the brat. Since the dog incident, NJ has bumped her mouth on the hard plastic side of her bottle (arguably her fault, but I'll take the hit for that since I was holding the bottle), and my thumbnail scratched her leg when I was changing her pajamas. Both times, NJ started to cry and I had to blow some pretty impressive raspberries to get her to smile again. Apparently it's Break the Baby Day; no permanent damage yet, but the day's only half over. Perhaps I should just leave NJ on the floor with a pile of toys and Willie sitting a few feet away, keeping an eye on her. Because for today, at least, he's being a more capable parent than I am.
Posted by Dad Solo at 10:02 AM