Today I took NJ in to my old office to meet my team. It's in Bellevue, across Lake Washington -- the farthest she's ever been from the cozy lair that is our home. She was an adorable little rattle-wielding chatterbox on the drive over, and the first half of our visit on the eighth floor was great. Folks who only knew her from photos on the Internet and my constant bragging were delighted to see her, and some immediately asked to hold her. (My team leader, who met me in the lobby, snatched her up the second she saw her.) NJ did her usual thing, soaking it all in -- wide-eyed, smiling occasionally and cooing once in a while.

The first indication that the mood was changing came when my team leader said "Oops" and held NJ away from her blouse a bit to reveal a couple of small spit-up spots. (She has two kids, so she knows.) NJ was passed around some and started to get cranky. Maybe all the attention put her in I-vant-to-be-alone mode. The clock on the wall said it was time for her to eat, then nap, and when I pulled a bottle of formula out of my bag, her eyes lit up and she reached for it. We repaired to my manager's office and NJ ate for a while, but after finishing up she still wasn't in a better mood. A couple more people stopped by, and NJ yakked a big stream of white goo onto the woman who was brave enough to hold her, straight down the good sport's shirt. ("It's OK, I have buttons," she said, pointing to the sweater she would button up later to hide the stain.) I ended up walking NJ out to the elevators as she cried some more and others stole quick glimpses of the Flickr Princess.

Once you're out of the parking garage and on the street, it's a five-minute drive to the highway that leads back to Seattle. Before we reached the on-ramp, this was the scene in the back seat: 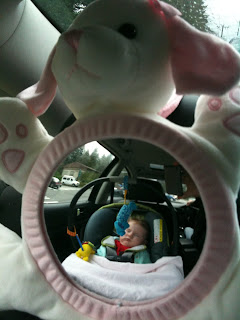 (Yeah, that dog mirror is pretty obnoxious. I try to take it down whenever NJ isn't in the car, but it's all the way in the back seat, and I don't always remember ...)

Overall, NJ's personal appearance was a success. She was adorable and I was able to use some of my best baby stories and stay-at-home dad stuff on a new audience. The visit was late in her meal-nap time frame, so crankiness was easily explained. I'm happiest that she readily smiles at new people. One person we met said that's a sign that she's seeing lots of smiles and happy time at home. I certainly hope that's the case.
Posted by Dad Solo at 5:22 PM