At five months old, NJ has outgrown all of her 0-3 months clothes and a lot of her 3-6 months clothes. Her weight is average, but her length (we'll call it 'height' once she stands, or at least sits up on her own) is off the charts, almost: 99th percentile. So, after a hugely successful Round One of clothes buying, gifting and recycling -- we actually shipped off infant clothes that hadn't even been worn yet to a friend who recently had a baby -- the kid needs almost a completely new wardrobe. The Wife went online the other day to get some very nice Baby Gap offerings, but I have to say, at the risk of sounding all braggy, I think Dad Solo hit a home run with this little number from the good people who keep Bill Graham's legacy alive at Wolfgang's Vault: 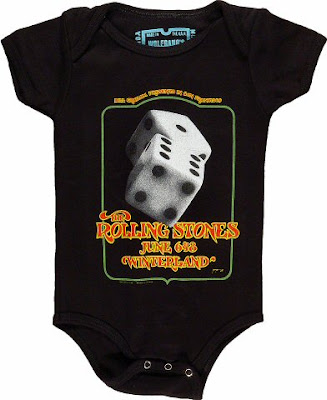 Uh, yes, Dad Solo has the same image on a t-shirt that he bought years ago. How did you know? Why do you ask? You think he's trying to mold NJ to his specific tastes? Is that what the rock-music-turned-into-lullaby CDs are all about? And the Beatles onesie she's been sporting lately? Why, how very, very cynical of you. I only want what's best for the child.

And sure, to me that means Keith Richards guitar riffs; Charlie Watts' swinging beat; poetic perspectives on growing up from Townshend, Springsteen and Strummer; Elvis Costello's snarky determination to make geeky be cool; and that "take me seriously, please, but whatever you do, don't take me seriously" thing that Bono has perfected. Sure, she'll cast this stuff aside one day to listen to God knows whatever will be popular in thirteen years, but I'm determined to make sure she soaks up as many Lennon-McCartney lyrics and awkward Clash chord changes as she can during her early, formative years. And even if she doesn't appreciate it, hopefully it'll give her an ingrained sense of what's important to her father. I don't listen to it now, but one of my best, earliest memories is sitting in the den getting into "Yakety Sax" on the Boots Randolph LP my mother sometimes put on to accompany her housecleaning. I think we might have even danced a time or two.

You may be thinking "PROJECTION," and you're probably right, but another relevant fact is this: I'm a little sick of looking at her shirt and seeing an adorable teddy bear or a pair of cuddly moose or a turtle with a funny hat. Roll those tumbling dice, I say. And anyway, if you saw NJ's beaming smile as we dance to "Brown Sugar" and "Oliver's Army" in the kitchen, well ... you'd know. On some level, she absolutely digs it.
Posted by Dad Solo at 10:28 PM